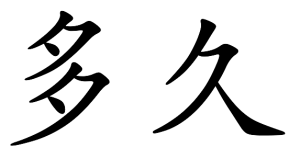 He ran for 20 minutes.
I study French for two hours every night.
How long have you been living in London?

The two most commonly used patterns are:

他休息了半个小时。
He rested for half an hour.

我考虑了四个星期了。
I have been thinking about it for 4 weeks.

我要跑一个小时的步。
I’m going to go running for an hour.

我在北京住了三年多了。
I have lived in Beijing for more than 3 years.

This third pattern is less commonly used, although it is grammatically correct:

他跑步跑了四十分钟。
He ran for forty minutes.

我做作业做了半天啦。
I have been doing my homework for ages!

These first three patterns can be all turned into yes-no questions by using 吗 at the end of sentence.

Alternatively, by using the question words 多长时间 (“how much time”)，多久 (“how long”) and 几+Time-Word (“how many” + minutes/hours/days etc.) in place of the Time Duration Phrase, the sentences can be turned into open-ended questions.

你想在中国住多久？
How long do you plan to live in China?

你的老婆做饭做了多长时间了？
How long has your wife been cooking the meal so far?

1. The 了 particle can be used immediately after the verb to show the past aspect of the verb (i.e. “did”).

2. If 了 is used immediately after the verb and also at the end of the sentence, it indicates the present perfect continuous aspect (i.e. “have been doing”).

3. Modal verbs (such as 应该，必须，要 etc.) should be placed before the first verb of the sentence only.

4. In the second sentence pattern, 的 often can be omitted.

5. If the object is a personal pronoun, it cannot be used in the second sentence. In other words, you can’t say , but you can say 我等了他等了一个小时.

Pattern 1: Intransitive Verbs: Subject + Verb-Intransitive (+ 了) + Time-Duration-Phrase (+ 了)
(Note: In this example, the double character 学习 can be shortened to the single character 学 when followed immediately by 了.)

The following two sentence patterns are much less common. I don’t see them very often and they don’t provide any additional meaning to the sentence, so whilst you should be aware of them, it isn’t worth spending a lot of time learning the grammar pattern. The Chinese Grammar Wiki, for instance, does not feature the following phrases.

This sentence is distinctive from the patterns described above insofar as 有 is used before the time duration phrase.

她跟她男朋友谈恋爱有六个月了。
She has been dating her boyfriend for six months.

If the verb is transitive, then you could use this pattern as well. It is a variation on the second pattern with the Object used at the start of the sentence. Again, it’s not so common.

中文，他学了十年多了。
He has studied Chinese for more than 10 years.

The construction 已经…了 can be used in all five aforementioned sentence patterns to emphasise the duration of an action. 已经 is mostly translated as “already”, and when expressing a time duration it usually implies the Present Perfect Continuous aspect of the verb (i.e. the Double 了 sentence, or “have been doing” tense in English.)

他已经在那家公司做了好几年了的工作。
He has already been working at that company for many years.

The two most commonly used sentences expressing a Time Duration Phrase are:

Mandarin Friend is a free blog aimed at intermediate level students of Chinese.